Like so many in his profession, Gillette fashioned a career out of fictions. In another time and another place ~ let’s say, Elizabethan England ~ he would have performed in what were called masques, dramatic entertainments designed for special occasions or holidays, or to amuse royalty. In these little snippets of shows the performers sang, danced, read poetry, and portrayed characters allegorical, mythological or classical. Spectacle being all important, they wore elaborate costumes amidst minimal settings, and ~ for good measure ~ they wore masks.
Gillette’s stage fictions were many: from Benvolio, Shylock and Rosencrantz to Joe McCosh, Augustus Billings, Lewis Dumont, Crichton, Carrington, Dearth, and Sherlock Holmes. These were the masks he wore on stage. Off stage, the mask he wore was simpler but more impenetrable ~ aloof, mysterious, eccentric, unknown and for the most part unknowable.
A master of reticence, he kept no journal, granted rare interviews, and allowed only a privileged few inside his carefully constructed and studiously maintained reserve. He burned most of his personal papers and correspondence before his death. He wished most of all that no one would ever know his secrets.
He made his living and his fortune in the most public of professions, he was among the very best of his time at what he did, and he left an impact still felt and acknowledged throughout the Western World nearly a century after his death. Yet, his life remains a greater mystery than any presented on the stage. Few knew him then. None know him now. Like the detective whose image he created, he remains, in the words of Orson Welles, one of those permanent profiles, everlasting silhouettes on the edge of the world. And, there he stands, still invisible behind the mask he never removed, still known mainly through the modern day masques he created for our entertainment.
So, just who and what was this permanent silhouette?
He invented or developed several aspects of modern theater. He helped boost the careers of some of our most distinguished thespians. He built one of the most eccentric homes in America. And he singlehandedly created the public image of Sherlock Holmes.
He was born William Hooker Gillette ~ "Will" to his family and friends ~ in 1853 amidst the most cultured and intellectual haven in America. He became a towering figure in an age of towering figures, a celebrity beyond the scope of all but two of the neighbors of his youth. He grew up within shouting distance of the lot on the western edge of Hartford, Connecticut, where Samuel Clemens built his beautiful house and enjoyed his happiest and most productive years; and he lived to be a featured speaker at the centennial celebration of the great humorist's birth.

Gillette is best-known today as the living personification of Sherlock Holmes. Over the years, he gave living substance to this fictional hero, lifting him off the printed page and infusing into the character a life that would never end. If Doyle gave Holmes to the world, it was Gillette who made him seem so real that even today many people believe he actually lived. Georg Schuttler, in his PhD thesis, William Gillette, Actor and Director (University of Illinois at Urbana-Champaign, 1975), noted that By his striking appearance, his economy of movement, and by his voice which concealed his emotions, Gillette imparted complete realism to Sherlock Holmes. His portrayal erased – at least for the three hours of the performance – all doubts that such a master sleuth actually existed.
This Yankee aristocrat also established for all time the Holmes image with the three items most associated with the master sleuth: the deerstalker cap and the calabash pipe, thus creating arguably the most instantly recognizable image in the world. And it was from Gillette's Holmes, not Doyle's, that Hollywood film-makers derived four of the most famous words ever spoken in the English language, "Elementary, my dear Watson."
But William Gillette (he never used his middle name or initial) was more than simply the actor who gave Sherlock Holmes to the world. He was one of the world's premier actors and playwrights before and after the turn of the last century, a matinee idol of enormous appeal, and an imaginative genius who made some important contributions to the theater that are still in use today.
He was to the theater what Clemens and Theodore Dreiser were to American literature, a leading exponent of naturalism. Born in the era of melodrama, with its grand gestures and sonorous declamations, he created in his plays characters who talked and acted the way people talk and act in real life. Held by the Enemy, his first Civil War drama, was a major step toward modern theater in that it abandoned many of the crude devices of nineteenth century melodrama and introduced realism into the sets, costumes, props and sound effects. In Sherlock Holmes, he introduced the fade-in at the beginning of each scene, and the fade-out at the end, instead of the slam-bang finishes audiences were accustomed to. Clarice in 1905 was significant because, for the first time, he sought to achieve dramatic action through character rather than through situation and incident.
In a 63-year career, he established the strong, triumphant heroic persona later employed on screen by John Wayne, Sean Connery and Harrison Ford. And, along with fellow thespians John Drew, Otis Skinner, Henry Miller, and a few others, he helped overcome America's puritanical objection to the theater and showed that, while former actors may not have always been gentlemen, there was no reason why a gentleman could not be an actor.

He was charmed by children, particularly young girls like nine-year-old child star Elsie Leslie, and by such young ladies as 17-year-old Ethel Barrymore and 18-year-old Helen Hayes (with Gillette in 1918, right); but his interest in them was purely paternal, and his conduct, however lavish at times, was never inappropriate. Except for the reticent Ethel, whose vanity he wounded with a bit too much gallantry, these young girls spoke glowingly of him for as long as they lived.
He rarely drank alcohol and smoked more on stage than off, never indulged in drugs, and overall lived a remarkably clean life. As a subject for psychoanalyzing, this eccentric genius might make for a remarkable study, but scandalmongers will have to look elsewhere for their fodder.
William Gillette, America's Sherlock Holmes is one of the few authentic accounts of his life, and it corrects many errors and misconceptions. Yet, in the end, when it comes to piecing together a life many decades after it has been lived, we are drawn back to the words of Gillette’s good friend, Samuel Clemens, who claimed to have made a discovery of "the wide difference in interest between ‘news’ and ‘history’; that news is history in its first and best form, its vivid and fascinating form, and that history is the pale and tranquil reflection of it."
For the better part of a century, William Gillette made news, much of it known throughout the western world. Today, all we can offer is a pale and tranquil reflection of it, gathered as best we can from news clippings and letters and the published recollections of those who knew him and shared the news he made.
Considering that, however, those pale and tranquil reflections give us perhaps the greatest clue to how magnificent he really was, for the range of his friends and acquaintances was enormous. First, the people he grew up amongst in the intellectual and literary haven of Nook Farm, two of whom ~ Harriet Beecher Stowe and Samuel Clemens (Mark Twain) ~ did as much as, or more than, all but a handful of others in shaping the century in which they lived. He performed with America’s greatest actor of the century, Edwin Booth; he was personally invited to become the first American actor to take the stage owned by the greatest British actor of the era, Sir Henry Irving; and he was managed by the world’s foremost theatrical genius, Charles Frohman.
He gave initial boosts to the careers of four of our most cherished thespians: Maude Adams, Ethel Barrymore, Charlie Chaplin, and Helen Hayes. And he was the author’s personal choice for major roles in two plays by James M. Barrie, the creator of Peter Pan. He dined with Presidents. He entertained kings and queens. The political cartoonist Thomas Nast, the theatrical critic Alexander Woollcott, Utah wartime governor and doctor/dentist/lawyer/wheeler-dealer Frank Fuller, and the creator of literature’s best-known fictional hero, Sir Arthur Conan Doyle, were his friends. As for admirers, simply create a Who’s Who of the Western World for the last three decades of the nineteenth century and the first three decades of the twentieth, and you’ll pretty much have them.
His many other friends and admirers cover a broad landscape of the international scene. They were enormously different, extraordinarily gifted and brilliant, and possessed both a rare vitality and an immense sense of purpose that shaped the times in which they lived. It is they ~ probably more than anything in particular that Gillette ever accomplished ~ that made for what was, after all, a very extraordinary life. 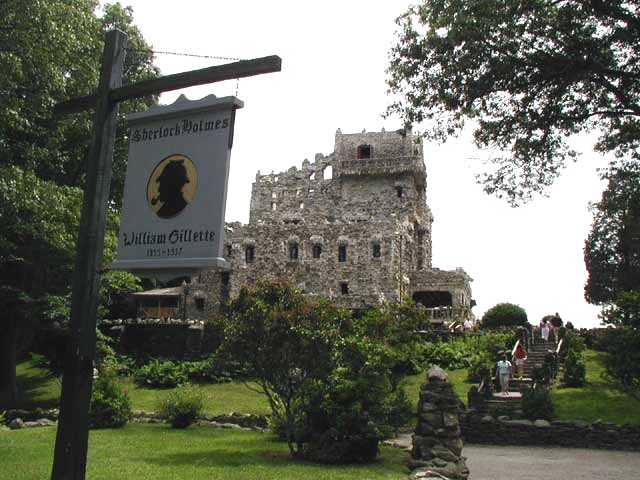