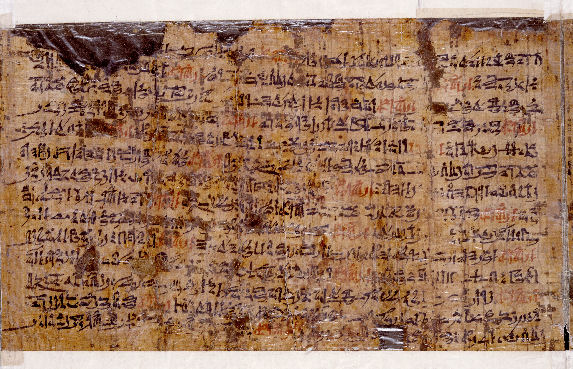 The Papyrus Ipuwer,
Egyptian Version of the Plagues ~
A New Perspective

[Published in The Velikovskian, January 1997; this was the first scholarly work in nearly half a century to challenge Immanuel Velikovsky’s view of the Papyrus Ipuwer as an Egyptian version of the plagues described in the Book of Exodus, and yet show that Velikovsky’s connection of the two was correct] 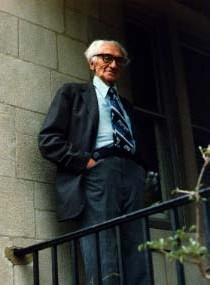 In the spring of 1940, Immanuel Velikovsky (left) pondered what kind of natural catastrophe had turned the plain of Sodom and Gomorrah into the lake which Joshua and the Israelites came upon after the Exodus. He pondered the plagues described in the Book of Exodus, whether or not they were real and whether or not there was an Egyptian version of them.
In search of just such a document, he soon discovered in a reference book the mention of an Egyptian papyrus by a sage named Ipuwer declaring that the Nile River was blood. Locating and studying the English translation of the papyrus by Alan Gardiner, he was struck by the fact that the papyrus seemed to be a description of a great natural disaster. To Velikovsky, however, it appeared to be more than that. He believed he had found an Egyptian version of the plagues described by Moses in the Old Testament Book of Exodus.

"All the waters that were in the river were turned to blood," Moses had written.  "The river is blood," Ipuwer concurred.

Moses wrote that "the hail smote every herb of the field, and brake every tree of the field."  Ipuwer lamented, "Trees are destroyed" and "No fruit nor herbs are found..."

Finally, Moses wrote that "there was a thick darkness in all the land of Egypt."  As Ipuwer succinctly put it, "The land is not light."

Velikovsky's views of the Exodus, the plagues, and the Papyrus Ipuwer were first stated in his Theses for the Reconstruction of Ancient History in 1945:

In many of these points Velikovsky was correct, but in some he erred. Ipuwer must have witnessed the plagues, because everybody in Egypt did; but Ipuwer did not describe them.
The king to whom Ipuwer supposedly addressed his admonitions is thought to have been Dedumesiu I, the 33rd (or 34th) king of the 13th Dynasty, according to Theban monuments found at Thebes, Gebelein, and Deir el-Bahri. It could be that this is the same king as Tutimaeus, of whom the third century B.C. Egyptian priest Manetho wrote:


Breasted: "While there is no unquestionably predictive element in this passage, it is a picture of the ideal sovereign, the righteous ruler with 'no evil in his heart,' who goes about like a 'shepherd' gathering his reduced and thirsty herds. Such a righteous reign, like that of David, has been, and may be again. The element of hope, that the advent of the good king is imminent, is unmistakable in the final words: 'Where is he to-day? Doth he sleep per-chance? Behold his might is not seen.' With this last utterance one involuntarily adds, 'as yet.'"85
Ipuwer, after watching the death throes of his kingdom and longing for the ideal king, goes on to recall all that was good: ships going upstream, nets being drawn, birds tied up, the hands of men building pyramids, ponds dug and plantations created, men shouting and getting drunk (which gives them happy hearts), beds prepared, needs satisfied, and fine linen spread out on New Year's Eve.
After the Egyptian sage has concluded his speech, the king responds: "What Ipuwer said when he answered the Majesty of the Lord of All: [...] all herds. It means that ignorance of it is what is pleasing to the heart. You have done what was good in their hearts and you have nourished the people with it(?). They cover their faces through fear of the morrow (16,1).
"That is how a man grows old before he dies, while his son is a lad without understanding: he begins [...], he does not open his mouth [to] speak(?) to you, but you seize him in the doom of death [...] weep [...] go [...] after you, that the land may be [...] on every side. If men call to [...] weep [...] them, who(?) break into the tombs and burn the statues [...] the corpses of the mummies [...] of directing work [...]" 17,1).
On this last passage Erman concluded, "Isolated words still surviving show that the subject under discussion was still the plight of the land, weeping, the forcing a way into the tomb-chapels, and the burning of statues."86

* * * * *
What became of our friend the scribe is not known. That the Admonitions ended with this last verse was argued by Gardiner on the grounds that, like the Dispute Over Suicide, it ends with the question of "whether life or death is preferable..." And Gardiner's comment on verse 16,1 is poignant:


Gardiner and all other interpreters of this verse assume that Ipuwer is speaking sarcastically to the king, but that may not be the case. If the pharaoh who was responsible for Egypt's woes was lost in the Place of the Whirlpool, or by whatever means the poor people of Ipuwer's text disposed of him, and if the king of this text is a successor who did his feeble best to help his people in the midst of a terrible disaster, then there is every reason for Ipuwer to tell this king "thou hast done what is good in their hearts. Thou has nourished them with it." It is worth remembering that the exact circumstances of this confrontation would have been contained in the beginning of the papyrus, which is now lost to us, but that the audience with the king occurred after the conquest described by the sage.
T. E. Peet analyzed this work of Middle Kingdom literature:


But Breasted, dean of American Egyptologists after the turn of the century, saw Ipuwer not as a pessimist but as a realist with a prophetic vision: "The peculiar significance of the picture lies in the fact that, if not the social programme (sic), at least the social ideals, the golden dream of the thinkers of this far-off age, already included the ideal ruler of spotless character and benevolent purposes who would cherish and protect his own and crush the wicked. Whether the coming of this ruler is definitely predicted or not, the vision of his character and his work is here unmistakably lifted up by the ancient sage ~ lifted up in the presence of the living king and those assembled with him, that they may catch something of its splendor. This is, of course, Messianism nearly fifteen hundred years before its appearance among the Hebrews."89
Each in the cast of characters met his separate fate. The king to whom Ipuwer addressed his admonitions, perhaps one of the provincial rulers of the late 13th Dynasty, suffered the same fate of historical oblivion as other local rulers of his time, who all fell under the tyranny of the Hyksos. That tyranny would not last forever, however, because the Lord had promised Moses that he would wipe Amalek from the face of the earth,90 and within half a millennium the Hyksos/Amalekites were no more.

Egypt suffered no such annihilation, but its sufferings only began with the Hyksos. "For the Egyptians...," Hayes observed, "the Hyksos did two things. They rid them once and for all of the old feeling of self-sufficiency and false security, born of a misplaced confidence in Egypt's unassailable superiority over, and aloofness from, the other nations of the world; and, because they themselves were Asiatics with a kingdom which appears to have embraced northern Sinai and much of Palestine, they brought Egypt into more intimate and continuous contact with the peoples and cultures of western Asia than ever before in her history."91
However, a long road of subjugation lay ahead as one conqueror after another ~ from the Assyrians to Alexander the Great to the Moslems to the French under Napoleon and finally the Germans under Rommel ~ planted their heels squarely on the land of the Nile. Then throughout the 19th century British, French and German archaeologists plundered Egypt, removing its ancient treasures and placing them in museums and laboratories in their far off lands. Egypt remains today a nation living solely off of past glories.
And the Israelites, having wandered in the desert for 40 years, eventually found their way into the Promised Land, lived in bliss for a few centuries, thrived under the monarchy of David and Solomon, and then fell apart, to be eventually dispersed again from their homeland for nearly another 1,900 years. Yet, even in exile, they retained their culture and their ethnic identity, and in 1948 they reclaimed their homeland. Today, as then, they find themselves at the center of international controversy, universally despised, yet eternally triumphant.
Finally, Velikovsky published the book that would launch the greatest scientific controversy of the century and one of the blackest episodes in the history of academia. Along the way he turned conventional 20th century uniformitarian science upside-down and returned us to catastrophism, on which all of terrestrial and celestial science is now based. He dismantled the conventional history of the ancient Middle East and showed it to be the fabrication it really is, and he helped give us a truer understanding of the nature and history of our planet and our solar system. To date, six journals, nineteen symposia, and dozens of books and published papers have been devoted to discussing his theories and carrying on the work he began. And his ideas, once dismissed as the ravings of a crank, have for the past 40 years been finding their way into conventional mainstream scientific thought.
His work crossed over, and stimulated new directions of thought in, a vast number of academic fields, which alone is no mean feat; but he also showed us, as the Washington Evening Star put it, to "not be afraid to stake out new intellectual territory in defiance of fashionable thought."92 He made mistakes, of course, and he couldn't be right in every detail of a theory that swept so broadly across nearly the entire academic landscape. That he was so right about so much has left critics and admirers alike gaping at the wonder of it all.
More by the direction in which he pointed than the theory he proposed, Velikovsky pushed science and history in entirely new directions. He challenged the mysteries of the universe. He sought answers to our most perplexing questions, discovered many, and inspired inquisitive minds to search for more. That alone will mark him as one of the most profoundly influential scholars of the century, perhaps even of all time.
And it all began with the Admonitions of an Egyptian Sage.